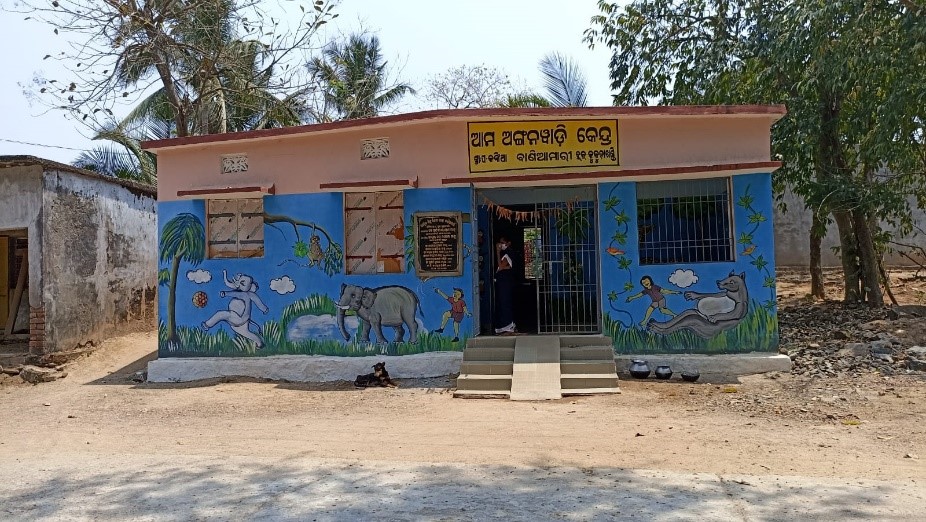 Baniamari, Lundriguda, Mitrapur—one could hear these names and call them colourful, or maybe exotic, and they are. India comprises a rural population of 70% which is a vast expanse indeed. Common media has allowed the more privileged section of our society to romanticise the poverty that we suffer, and portray our stories as supplications for sympathy. That, however, is not the case.

Baniamari is what one would call a small, indigenous village nestled in the district of Ganjam, Odisha. It is one of the revenue villages under the jurisdiction of the Kankia Panchayat. Although situated much lower down than Mitrapur, the village lies nestled among hills. This doesn’t mean the summers are less taxing as anyone in Eastern India will attest to, but Baniamari is sometimes treated to welcome gusts of wind.

As one enters the village, one finds a specimen of architecture, a mint-green water tank, set up by the Gram Vikas authorities in partnership with us villagers, that offers respite to us village inhabitants for a good period of 9 months a year. Upon delving deeper, one learns that it was set up in the year 2003, and its primary water source is the gravity spring emerging from the surrounding hills. This water tank in many ways is the heart of the village community. Although it was installed by GV’s team, it was built and funded largely by the villagers themselves. Its underground pipelines bring water to each of the houses through not one but three taps catering to the villagers sanitary, physical and culinary needs.

Standing by it in solidarity is a borewell built by the government. Blue, cylindrical and stoic in structure, this borewell goes unattended to until a rainy day, or the lack thereof. As one walks past the entrance and into the village, they are greeted by a bevy of bougainvillea, blooming in all its fuchsia splendour. To the left one finds the lavatories installed by Gram Vikas and constructed by the villagers, which is again supplied with water from the mint-green tank. Following the narrow, undulating bifurcation from the main village street, one finds themselves amidst cashew orchards with plump green fruit hanging off, ready to be dried, shrivelled, and sold to eager buyers. Past these trees lies the village dug well. Before the tank was installed, this well was the village messiah, supplying groundwater that was used for just about everything. It was damaged in the Phailin cyclone of 2013, and rebuilt by the villagers, and today rests within its burnt clay perimeters as circular slabs of stone cover its upward opening to keep the water cool inside. This dug well compensates for the three months when the tank is under disuse; it obtains its water from the Gravity spring and remains one of the most prized possessions of Baniamari.

An estimated two hundred and fourteen people call Baniamari their home; they live in a linear settlement distribution of fifty homes along with their goats and hens. Upon entering the village, one finds the Anganwadi, a free education system for both the village and surrounding areas that cater to children from classes one to eight, after which they go to the Gram Vikas School near Tamana in Kankia for their board years. Boys and girls alike study here and upon finishing their tenth grade, they can pursue higher education in nearby colleges in urban settlements like Chikiti.

A typical day in Baniamari starts at the crack of dawn. Each person goes about their day quietly, greeting each other and offering salutations should they cross paths. The animals, ever bursting with energy, too scarper about looking for food and tending to their young. Some of the villagers make their way to the fields, while those who rely on manual labour for their income go to their designated workplaces. The solitary shop owner in the village scuffles into his shop to open it up for a new day’s business. Those who work for the village committees and self-help groups (SHG) often have meetings to attend to, and do so as and when required. The morning session at the Anganwadi begins at 6.30 a.m. and goes on till 10.00 a.m. Therefore, mornings for the villagers are spent in the kerfuffle of getting the children ready, bathed, and then dressed to get to school on time. A festival observed in early April is Chaitra Mangal, the first Tuesday of the last month of the year which is considered auspicious and marked by pomp and gaiety. Earthen pots lit up with incense and coconut fibres are carried with peacock feathers to allow the smoke to enter households and ward away the evil eye. A sacrificial animal, usually a pig and a couple of hens, are also provided by the villagers to their deities.

After the bustle of the morning, the afternoons are slow-paced with the wind exhaling in dusty, heavy breaths and the sun beating down with all its might. The villagers generally spend them indoors under a hazy daze of slumber. The evenings are a time when the village folk gather at the hand pumps, the village shop, or underneath the bougainvillaea for their daily news catch-up and a cup of tea. The sun slowly mellows into the background streaking the sky with a myriad of colours and eventually gives in to darkness.

As a village, its folks could use the word content to describe themselves. They take their hardships as they come and deal with it as a community. Their presiding committee is a set of people they admire and respect; they are selected from among themselves in mutual consultation with one another. Baniamari holds two community halls that serve as meeting points for congregations. Those who have their cashew or tamarind plantations have a steady source of income to rely on annually, taking into consideration abiotic factors like rainfall and temperature. The other main source of income is daily wage labour, where one hopes to yield an amount of Rs. 200 a day, amounting to Rs. 6000 a month—although this may not always be the case. There isn’t an immense degree of migration from the village to urban settlements; most breadwinners find work in and around the village itself. Government rations keep the village supplied with staples like rice, wheat and lentils. One however needs more than just food to survive: The villagers grow their own vegetables, the harvest for which is again determined by the aforementioned abiotic components.

The pandemic was a setback for Baniamari as it’s been for the rest of the world too. The villagers could not venture outside for work and so their finances were impacted. Luckily, very few took ill or were fatally affected by the virus; they consider themselves to be ‘men of the earth’ and are used to toiling from dusk ‘til dawn. Moreover, they’ve all been vaccinated by the government for the requisite two times.

Although its villagers are small in stature, Baniamari does know how to commemorate the good times. A common saying among them is that they have thirteen festivals in twelve months. In this sea of occasions, they celebrate Makar Sankranti i.e., the shift of the Sun towards the zodiac Capricorn. The villagers don’t believe in hiring priests from outside; everything is a homely, close-knit affair, conducted and coordinated by the villagers themselves. When it comes to problems, the main ones included water and sanitation, but now the only shortcoming of the village, as a whole, is irrigation. Baniamari has canals that serve this purpose, but the heat has been on an increasing trajectory, and the rains, although present, are much lesser than what they used to be. When someone falls ill, the villagers tend to them using their own domestic methods, and although the nearest hospital is in Berhampur—about sixteen kilometres away, the villagers make sure to get those sick there in time. As it’s with all Indian villages, Baniamari’s inhabitants thrive on mutual support and make sure to help each other through thick and thin.

Anupama Choudhary, a Class 12 student of Modern High School, Kolkata, interned with Gram Vikas a few months back. This is her story about an enriching experience she acquired while living with the Baniamari community in the Ganjam district.

The household toilet and bathing rooms in Baniamari village. Photograph by Anupama Choudhary